The Courage to Love Screening with Dr. Patrick Carnes

It isn’t often in life that one gets to meet a personal hero. That is what Dr. Patrick Carnes is to me. Recently, I was offered an all expenses paid trip to Scottsdale, Arizona to screen my documentary film about sexual addiction and recovery, The Courage to Love at a retreat that Dr. Carnes was facilitating. I was to screen the film and lead a discussion afterwards with an audience of professional therapists and recovering folks from around the country including Dr. Patrick Carnes.  I gratefully accepted.

I had never heard of Dr. Patrick Carnes when I went to my first twelve-step meeting for sexual addiction in San Francisco twenty years ago. Soon thereafter, a friend in recovery recommended Dr. Carnes book, Out of the Shadows. I recall reading that book for the first time and weeping. I knew then, in that moment of profound grief, that what I had been struggling with most of my life actually did exist. It was called sexual addiction. Even today, after years and years of recovery this is a difficult thing to admit and talk openly about, yet, knowing that others have also struggled like me has helped lighten the weight of this cross to bear.

In October of 2014, I was invited to premiere my documentary film about sexual addiction and recovery, The Courage to Love at the Society for the Advancement of Sexual Health Conference in Portland, Oregon. (Oh yeah, many years ago Dr. Carnes founded that organization too!) When I received the conference program, I was humbled and a bit saddened to see that my film was screening at the same time as Dr. Carnes was speaking at the conference in the next room.

After my film premiered at the conference, I stumbled to the stage as the audience applauded. I wept. I could not contain my emotions as this film that took me seven years to complete, about a shameful topic that both haunted me and brought purpose into my life, was now being shared with the world. My personal story of addiction and recovery was one was one of four featured in the film, which made it even more of a vulnerable experience for me. I was truly coming out of the shadows with this film onto a much bigger stage than I could have imagined when my recovery journey began. I just wish Dr. Carnes could have been in the room.

Later that evening, my wife, our newborn baby daughter, and myself entered the elevator of the hotel to return to our room, and into the elevator walked Dr. Patrick Carnes. I whispered to my wife that it was Patrick Carnes and she nudged me to introduce myself. I froze. Dr. Carnes smiled at our little baby girl and offered a friendly comment. We arrived at our floor and I departed the elevator without saying a word. I guess star struck is the correct term in this case. My wife looked at me with a look of “you idiot!”, she couldn’t believe that I let that opportunity pass.

So, in June of 2015, I found myself in a room full of people screening my film The Courage to Love at Dr. Carnes twelve principles retreat in Scottsdale, Arizona (www.twelveprinciples.com). The retreat had a theme and a title long before I was asked to screen my film at the retreat. Ironically, this retreat weekend was aptly titled, “Courage”.  As my film was introduced, I looked out at the audience of 75 therapists and recovering sexual addicts and couldn’t help to notice Patrick Carnes sitting at the back of the auditorium. I mumbled some words about making movies with my Mom’s 8mm film camera and becoming a porn addict with my Dad’s Playboys all at about the ripe age of 12. And here I was as an adult combining those two unlikely early life experiences to share my documentary film about sexual addiction and recovery.

As the film ended, I made my way to the front of the audience. I looked out at the silent faces, many with tears in their eyes and someone simply muttered, “wow”. After a stirring conversation between the audience and myself, Dr. Patrick Carnes approached me and gave a great bear hug. The audience applauded as he pulled himself back, looked me deeply in the eyes and said with power, “Thank you Paul”. He then proceeded to hug me again. He went on to tell the audience that he always knew that it would take a documentary film to reach a broader audience about sexual addiction. He concluded, “And Paul has given us this gift.”

After this amazing moment with Dr. Carnes, a woman came up to me and asked, “Paul, did you see the movie American Sniper?” I responded, “No, I have not”. She then said, “I saw American Sniper in the theatre and it is the first time in my life that people sat in silence afterwards and did not move after the credits ended…it was a profound experience for me”.  She then proceeded to tell me with tears in her eyes, “Paul, the audience response today after watching The Courage to Love was the same experience for me. We were all just stunned.”

I will conclude by describing with one word the feeling that I felt sitting behind Patrick Carnes, trying not to stare at the back of his head, as he watched The Courage to Love. I was stunned. 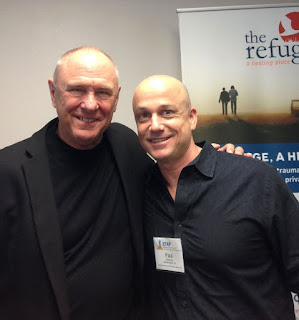